Today represented our first steps on Chilean soil, a country I know very little about and am looking forward to exploring. The topography of the country is interesting; over 4700km north to south, with a long western coastline bordering the Pacific and dotted with hoardes of islands, and an eastern spine formed in part by the Andes. Yet at its widest, Chile is less than 300km west to east. It is a vast country, with four distinct geographical areas and a mere 18 million inhabitants. This is the Los Lagos region. We are actually still in Patagonia here; it’s northern border is 160km north of here.

Today we dock in the southern port of Puerto Montt, named after one of the country’s early presidents. It’s a fairly average port city of some 211000 residents, in an area whose income is largely based on salmon but also logging, berries and meat production. Our itinerary was an attractive one based on natural beauty; a visit to the Petrohue river an its falls, a sail on Lake Esmeralda in the shadow of a volcano and lunch in the lakeside town of Puerto Varas.

As our tenders landed us ashore, low clouds and mist literally hung over the day; would we see anything? Our relentlessly optimistic guide promised the cloud would lift by 11am; a remarkably prescient prediction. Our coach took us out of town into countryside largely consisting of trees; some were rainforests and others a combination of local examples, and imported species, such as eucalyptus. We moved through farm lands, the farm buildings and houses very reminiscent of Bavaria. This reflects the importance of German settlers in the region. Soon, we arrived in Puerto Varas, on the shores of Lake Llanquihue. We would stop here on our return but meantime drove on towards Petrohue.

Chile is an intensely volcanic country, with some 2000 active craters, second only to Indonesia. They have regular eruptions and sometimes accompanying tsunamis; a public warning system via mobile phones is in operation. Sadly, persistent low cloud thwarted any sights of the nine volcanoes normally visible from our route. As we arrived at Petrohue river, things did not look promising.

The river carries rainfall and snowmelt from the volcanoes. Large swathes of mud crossing the road show where sudden heavy rains result in deluges which wash away the mud and roads. The falls themselves are splendid, even when the river is low as it is now at the end of summer. Paths lead among the falls and the green/blue waters given a hint of the splendours to come. There is a hint of the mists beginning to rise now, at least sufficient to let us see the walls of the valley through which the rivers has carved out its path; these consist both of magma and granite. 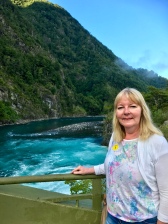 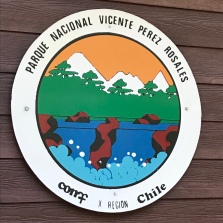 Next we carried on a few miles until the valley opened out into the Vicente Perez Rosales National Park, to reveal the emerald lake, Lake Esmeralda. This glacial lake has high mineral contents, including copper, giving the waters a magnificent green hue. 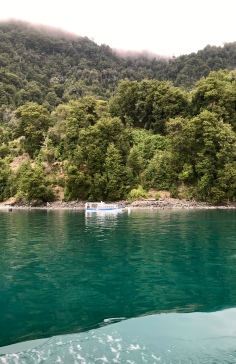 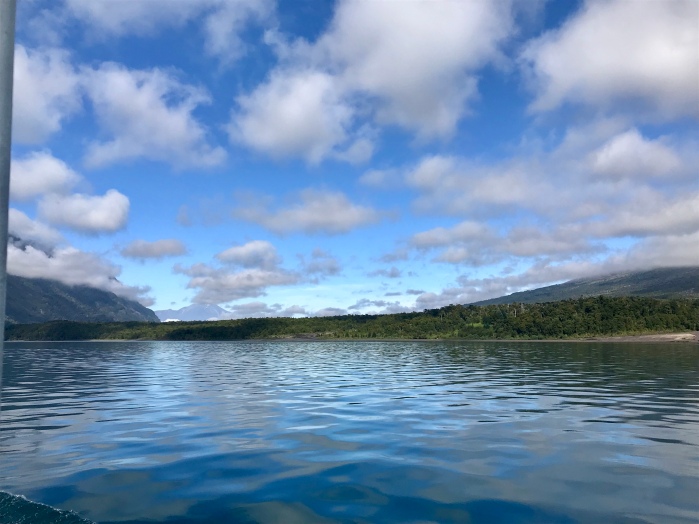 We set out on a cruiser, enjoying views of the forested surroundings, yet still desperate for a site of the snow capped volcano, Osorno, rising to over 8700 feet yet still completely hidden. With a cry and a point, someone indicated a gap in the clouds, a tantalising flash of white against blue sky. Cameras whirred in the excitement. For a few more moments, frustration and then, as if a curtain was drawn, the clouds lifted in stages and Osorno was revealed in its magnificence. And quite a sight it was, reminiscent of Fuji, rising majestically above the green waters. Somehow the mechanism of its unveiling was more magical than had we just arrived to find it all on display. Nature can be truly awesome at times. 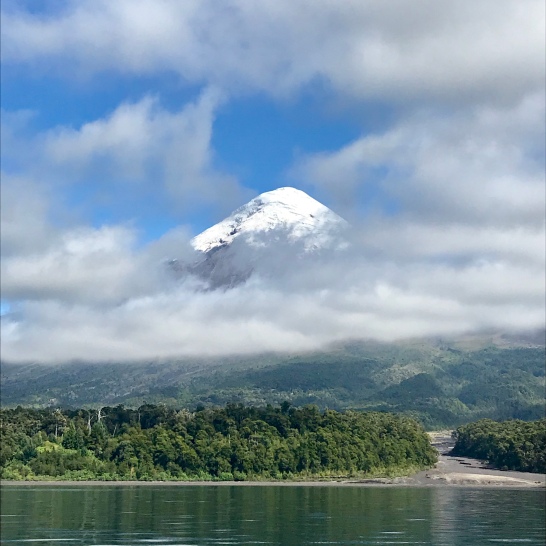 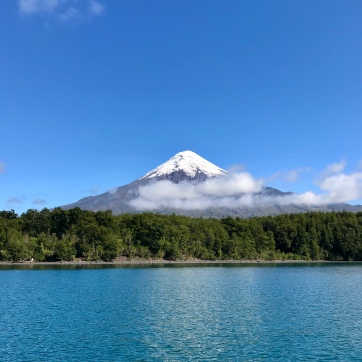 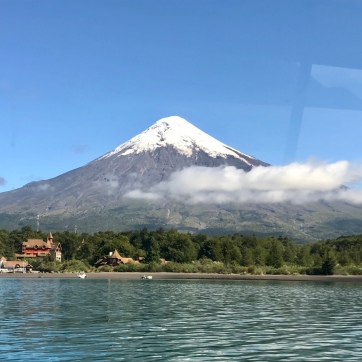 Thrilled by our good fortune, we boarded the coach for our return to Puerto Varas. This town was founded by German settlers 150 years ago and is nicknamed the ‘City of Roses’ for its lovely displays. It has a beautiful lakeside setting. Here we could see both Osorno and the nearby volcano Puntiagudo. Some beautiful lakeside views rounded of a wonderful day in the stunning beauty of the Chilean lakes. 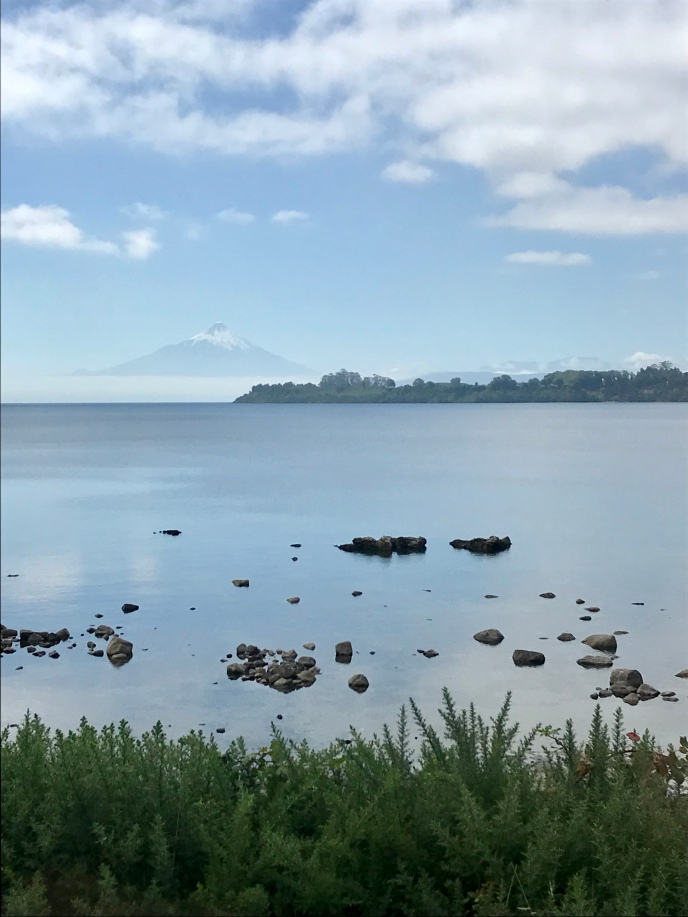 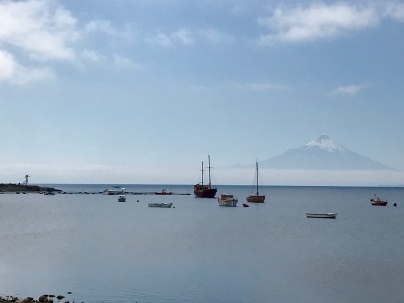 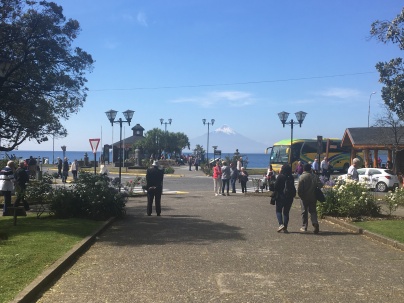 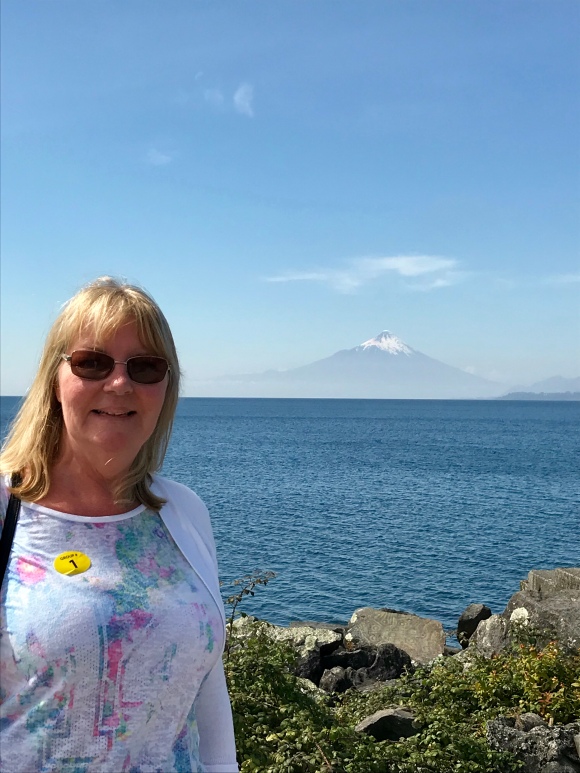 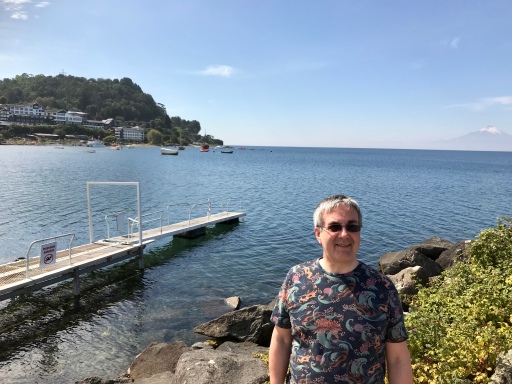