Each morning after arriving in port, our effervescent captain greets us with ‘Good morning and welcome to beautiful…’. With the best will in the world, not every port is ‘beautiful’, but this morning it’s hard to take issue. We’re in Puntarenas, Costa Rica, and it’s gorgeous. 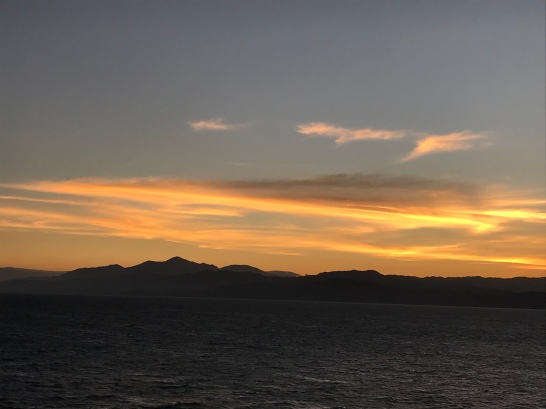 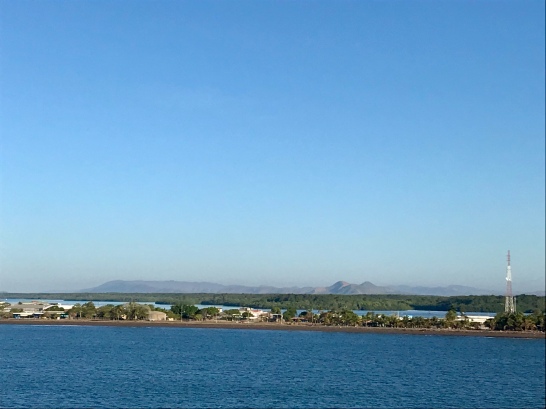 With warm nights we are sleeping with curtains and balcony door open, watching and listening as the ocean slips by. I woke at 5.30, another time change overnight, to a beautiful sunrise over the coast of Costa Rica. As we neared port, the pilot was dropped off on board then two small boats drew alongside; this was no cosmetic greeting party as they were soon hard at work pushing on the starboard side, helping us dock against strong currents. 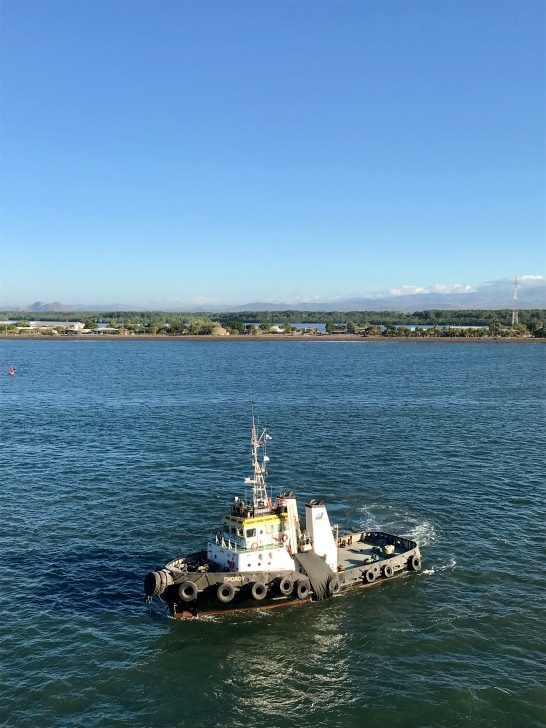 The small port, no more than 3000 souls, stands on a spit of land with a lovely beach in front and forest and mountains rising from mangrove fresh water swamps behind. We approached from the Pacific coast, but of course Costa Rica also has a Caribbean coast to the north; land borders are with Panama to the east and Nicaragua to the west.

From the sun deck 17 floors up, we towered over the people below helping us dock. Flocks of birds flew alongside. I had thought they were cormorants, but heard someone who clearly knows more than me about ornithology telling his wife that they were frigate birds; she rolled her eyes as I tried not to smile.

Soon the landing gangways were down and, taking advantage of the fact that our tour wasn’t leaving until lunchtime, I ventured ashore, enjoying a few local craft stalls and a walk on the beautiful beach with its dark volcanic sands. 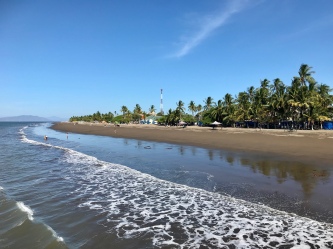 Costa Rica is a country of nearly 5 million inhabitants, dependent on natural products economically. Coffee is of prime importance of course, also pineapples, bananas, mangoes, cashews and melon. Technology is important too; medical equipment, call centres and microchip manufacturing are taking hold here. Near the coast, fishing is important but ecotourism is the mainstay of the economy, responsible for 16% of the country’s jobs and some 3500 million US $ annually in income.

The country scores highly on world rankings ecologically and has the stated aim to be the world’s first carbon neutral country by 2021. Our excursion today reflected the natural history of the country. We were to be taken by coach to a local train ride through the jungle scenery and the town of Mata de Limon and to the Tarcoles river to cruise through mangrove swamps.

We left Puntarenas behind, seeing very little in the way of buildings, and took a coastal route to the south. 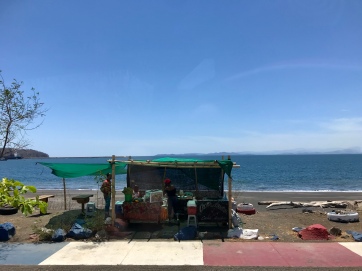 Leaving town we passed a van selling local vegetables by the roadside. Soon we were turning inland where our eagle eyed coach driver spotted a cappuccino monkey high in the trees. 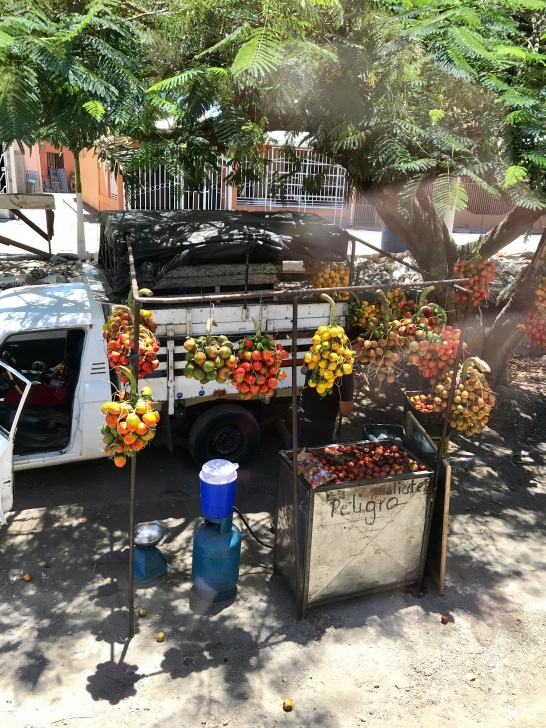 Soon the road became unmettled, the first hint of a fragile infrastructure. The countryside here was forested and incredibly dry; we had seen smoke rising from several distant bushfires.

We soon reached our river cruise destination on the Tarcoles river, boarding a flat bed barge to cruise the mangroves. 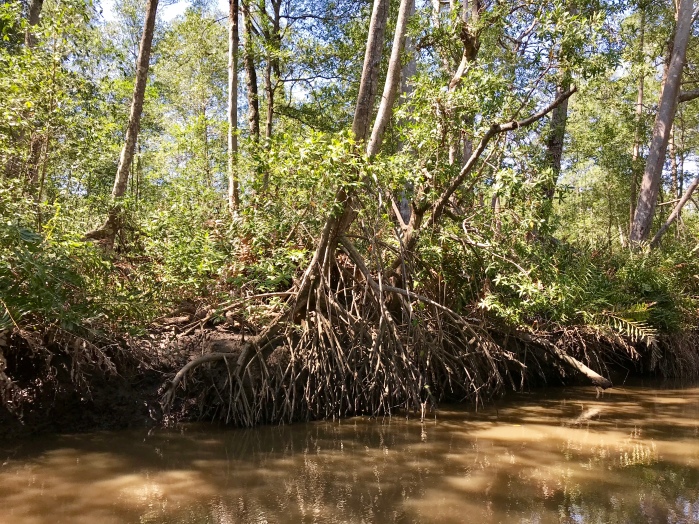 The banks slipped slowly by as we watched hopefully for wildlife. Birdlife was the main attraction, with green and blue herons. Our pilot spotted a howler monkey but I confess I couldn’t pick it out in the foliage. I did see the two baby crocodiles he pointed out though, as well as a line of small bats asleep on a tree trunk which looked for all the world like a knot in the wood.

The highlight, and what we had really hoped to see, was the red macaw. This beautiful bird is now endangered due to destruction of its natural habitat; this is one of only two places in Costa Rica where they are found. We could hear a pair chattering in the trees then our guide spotted them high in the trees; locating them was frustrating. Then, magically in a flash of crimson they took to the air for a few brief, unforgettable moments, resting briefly before soaring once again. We did spot another pair roosting on a nest but it is the moments in flight that will live on in the memory.

Back on the bus we were enjoying the air conditioning as the temperature was well into the 30s. As we took in the scenery, including plantations of mango trees, our guide informed us that 100% of the land here has electrical and water supply. All electricity is green, generated by water, wind or geothermal means.

After a brief stop to allow us to take some juice and fruit on board, and shop for souvenirs, we reached the station to board our train for a ‘scenic’ ride. The train is reconditioned from the 1950s and not built for comfort! The views of the local village were rather surprising; I had not anticipated the obvious poverty and very basic housing. It was striking, however, how happy the children were, smiling, calling and waving as we passed by. 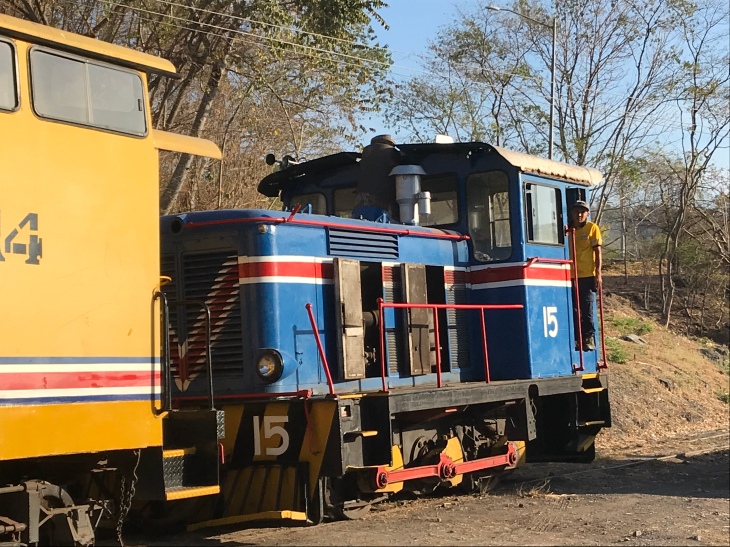 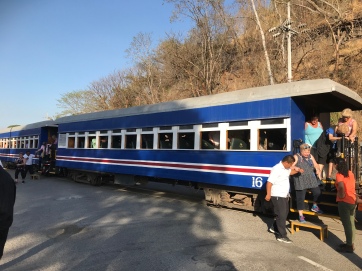 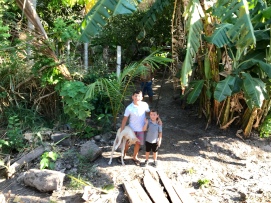 Having been in Vietnam, Cambodia and India I am not unfamiliar with witnessing poverty as a tourist. How does one approach this? Is it voyeuristic? Today my thoughts turn to the information we were given that every person visiting Costa Rica brings the country over $100 per day, and that we had spent in the local market also. I am determined at the same time to read more about this country and learn about its economy, health and welfare etc.

Our final stop was a charming folklore presentation of dance and music; what lingered was the smiles on every face taking part, again in particular the children. 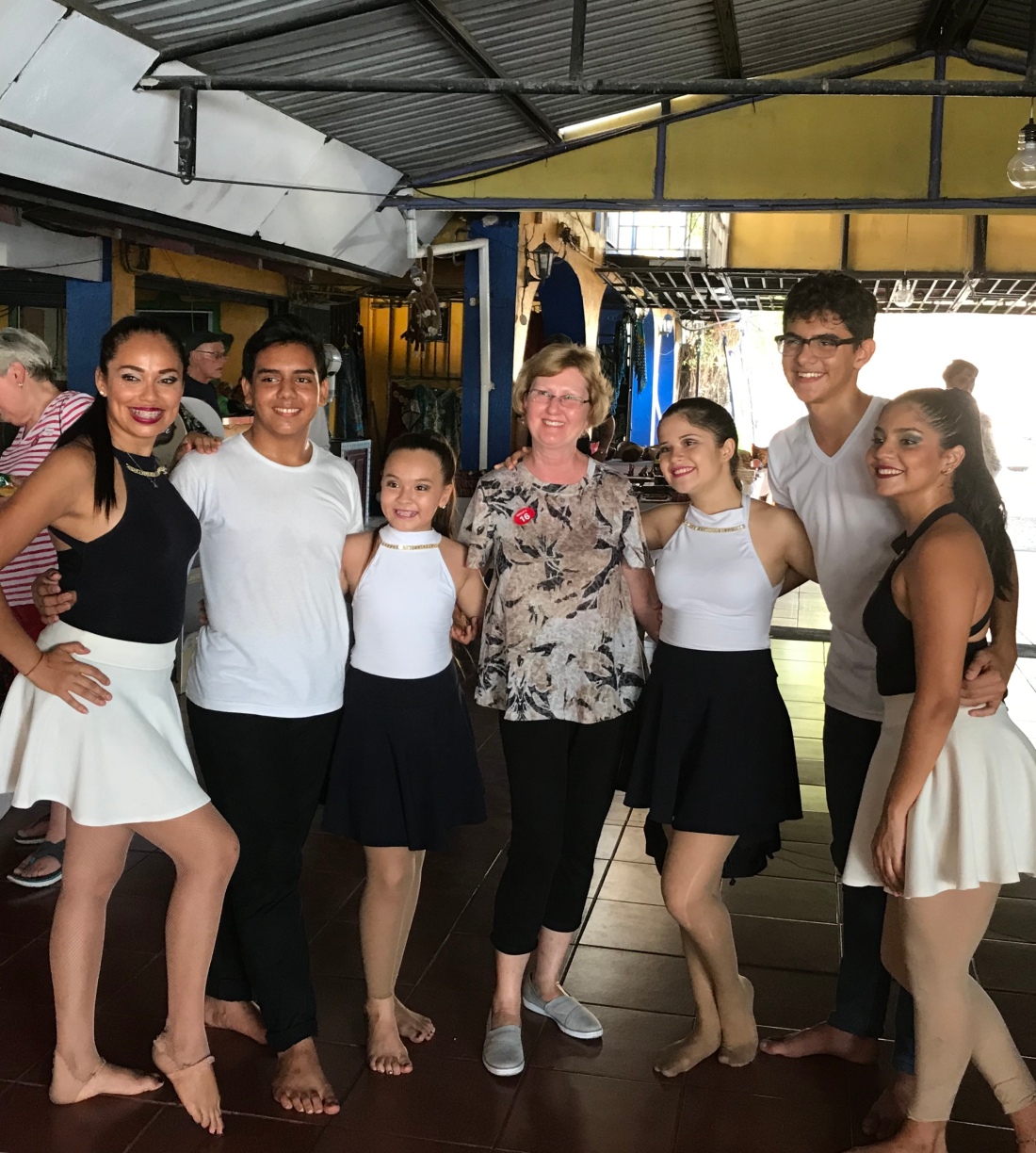 As I reflected on the day back on board, watching a beautiful sunset, I realised this had been one of my favourite days on this cruise. Why? I think it centres around the simplicity of life here, almost a naivety in the sense of uncomplicated satisfaction. Perhaps I’m wrong and people here eke out a miserable existence, but I sense not. I have been guilty many times of over complicating my life, be it how I think, or behave, or in a material sense. Several times in life I have benefitted from stepping back into a simpler existence. Lessons may be learned in this green and pleasant land.

Out of interest, look back at the pictures of the children in the village (there are three) and the picture of the dancers. I see happy faces, genuine smiles. Do you? 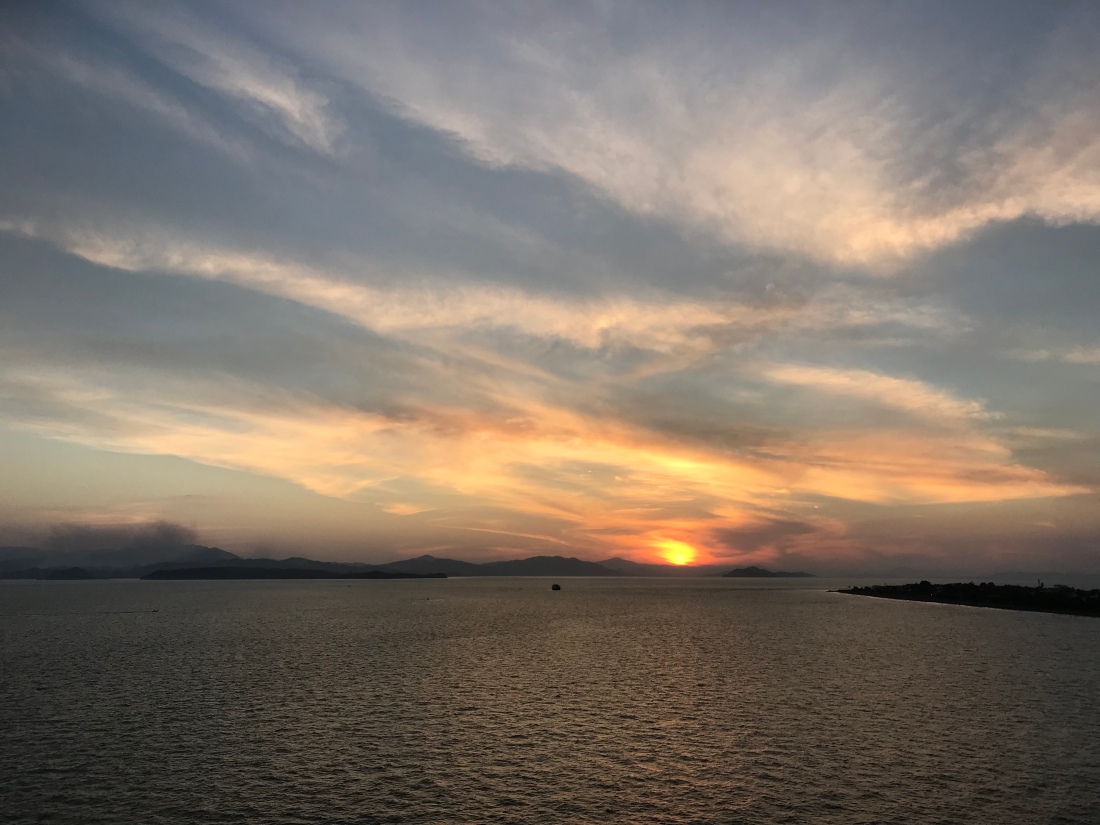