Sometimes it’s easy to be overwhelmed by the amount of information you’re presented with. I’m in Florence and, although I have been here many times there remains a long list of ‘must sees’ (more often ‘must see agains’!) demanding my attention. And, of course, I’m not alone; it seems every time I’m here the crowds are more dense and the queues longer. If you’ve paid your 16 or so euros and waited hours then you’re gonna see EVERY piece in the Uffizi or Accademia, right?

Like many devoted art viewers, I’ve had bouts of Stendhal syndrome. It’s also known as hyperkulturemia or Florence syndrome and has its own specific symptomatology. According to Wikipedia (so it must be true!) the Santa Maria Nuova hospital here, past which I walk every day, regularly treats patients from the Accademia who have met Michaelangelo’s ‘David’. So that explains the constant sirens I hear from my apartment day and night.

So, how to respond to such an opponent? Well, I try to  be selective now. Granted it’s a lot easier because I’ve been in the galleries before but actually there’s a lot of fairly average art on show so missing out pieces which don’t appeal is not too heathen or difficult. How to select what to see? Well, your guide book will have prepared you; very few of us will leave the Uffizi without seeing Botticelli’s ‘The birth of Venus’ and I think it is physically impossible to leave the Accademia without David glowering down on you. But I think it works too if you simply look at the art which stirs something in you, no matter who painted or sculpted it. You may choose to learn something about it but equally it can be just an aesthetic experience in and of itself. Mind you, if you start to get palpitation or dizziness,  step AWAY from the painting lest you find yourself speeding up the street in an ambulance disturbing my peace.

There’s another way I’ve found in my few days here to enjoy the beauty of Florence. Much of the art, including some of the finest, is on view 24/7, no need to queue or pay. And living here for a month allows me to go out early or late, when the worst of the crowds have gone, and gaze uninterrupted for as long as I choose.

Whenever I arrive in Florence, my first stop is always the Baptistery, specifically the East doors, facing the Duomo. These are replacements, the originals by Ghiberti are in the Museo del’opera del Duomo. Michaelangelo called them the Gates of Paradise and they are breathtakingly beautiful.  If the crowds have gone you can get close enough to the heavy metal bars to peer  through and feast your eyes. I have a large book, with beautiful photographic reproductions, detailing each panel. You can stand for hours and return many times and always see something new. But I always see, in the panel ‘Esau and Jacob’, the way Jacob raises his left heel. For me this is the epitome of the humanism born in the Renaissance, here manifest in is early, revolutionary art.

I have been reading ‘Mornings in Florence’ by John Ruskin. I always find his prose entertaining if opinionated; he’s not one to let the facts spoil a good story. In one section he details in excruciating detail the frescoes in the Spanish Chapel at Santa Maria Novella. Now I like seeing frescoes in situ but erecting a scaffold and spending five days going over them inch by inch is too much even for me. I also think the other thousand people trying to see them might object too. Never mind that none of the four artists he complains about seem to actually have painted there; he lets us know at length the merits and demerits of their labours.

He also details the 27 sculpted panels around Giotto’s campanile, in minute detail. Again, attributions seems a bit fluid but his technical appraisal of the works is a fine piece of critique. Now I have walked past the campanile hundreds of times and have never even noticed these panels. The section adjacent to the Duomo is now gated off but you can study the other panels for as long as you like, and no-one else seems to be there! It’s delightful.

Another ‘hotspot’ of Renaissance art, again sculpture, is Orsanmichele, in the Main Street between the Duomo and Palazzo Vecchio. On the outside of this converted grain mill are a series of niches, each dedicated to one of the Florentine guilds, and filled with a sculpture. It’s a veritable ‘who’s who’ of early to midRenaissance sculptors, with works by Donatello, Nanni di Banco, Ghiberti and Brunelleschi. As is my wont, I wandered slowly around the building, matching each niche with its guild with its sculpture. Typically analytical of me I’m afraid. When I came to ‘Christ and St Thomas’ by Verocchio, I noticed that Thomas’s right leg was extending towards the Street, completely out of the niche; it was as if the doubt for which Thomas was named was so great that he sought to flee. Looking closer I saw that most of the sculpture extends beyond the niche, which alters completely the way it is viewed as you walk past. Another quick circumnavigation confirmed that every other stature stays politely in its appointed space. At the time I did not know which statue I was focusing on; I had to check online. As I did so I saw a quote from a critic stating that this work was so revolutionary and so good that, were it by Michaelangelo, there would be queues a mile long paying top euro to see it. And yet there it is, right under the noses of the shoppers whose attention is on the designer shops nearby. 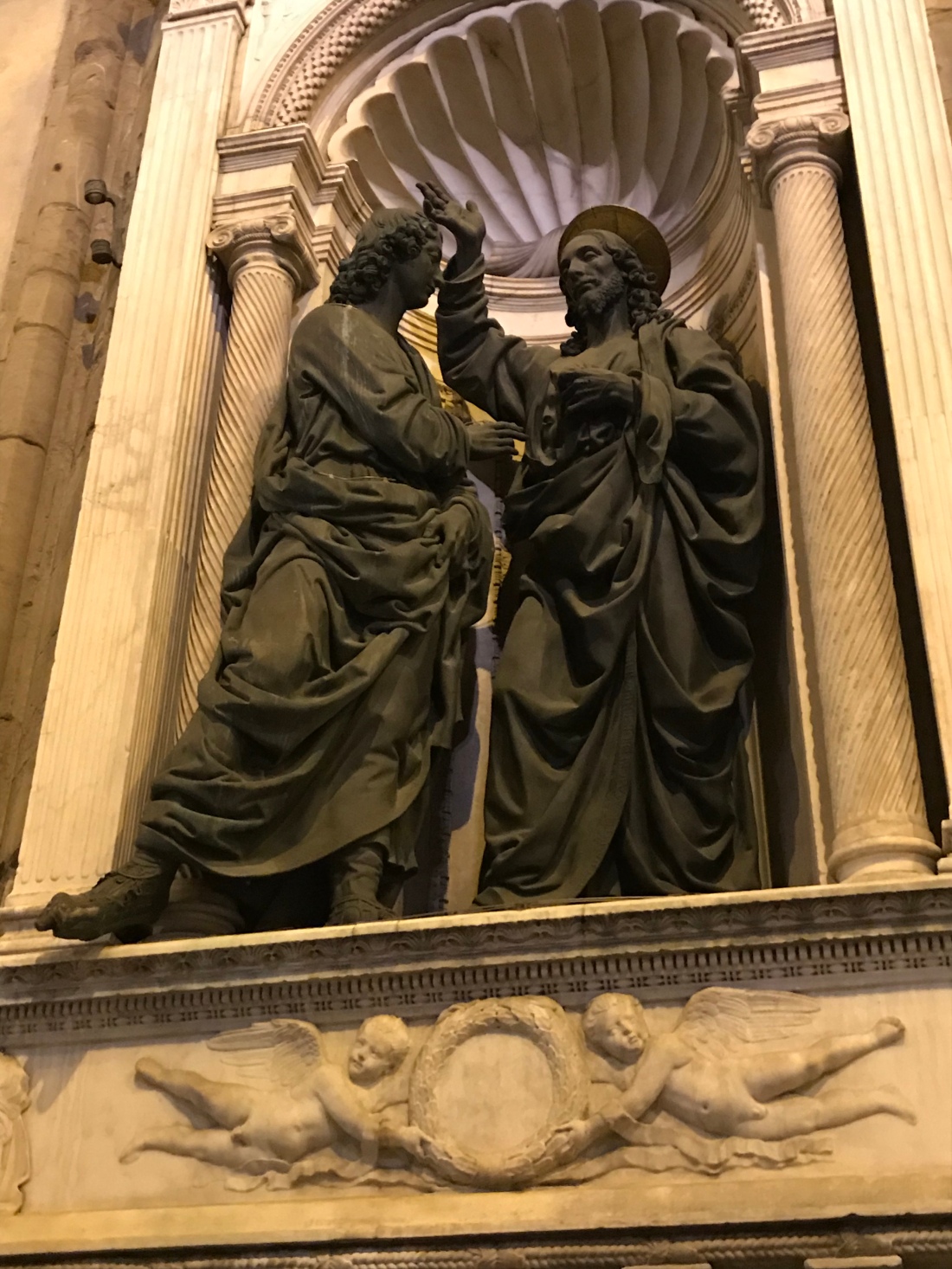 Finally, I reached the Piazza della Signoria and the Loggia dei Lanzi. Here are famous sculptures including Giambologna’s ‘The Rape of the Sabine Women’ and Cellini’s ‘Perseus’. Instead my eye was drawn to a pair of lions, known as Marzocco lions, a symbol of Florence. As I prepared to photograph one I noticed that there were a whole pride of lions there – a smaller standing one and a selection of heads carved into the pillar. It was a delightful small detail and one which I can’t find explained in any of my guidebooks or online. The devil is in the detail again. 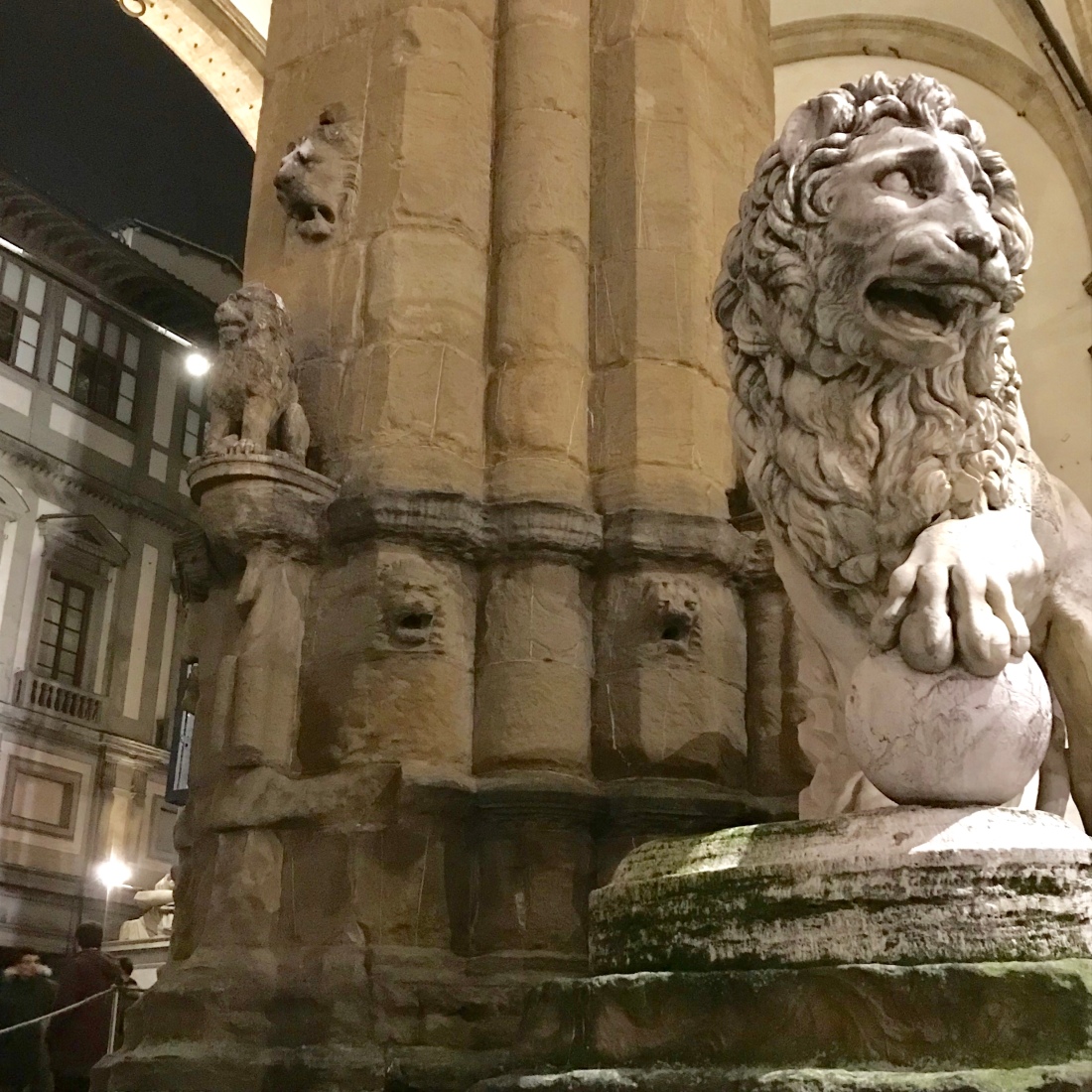